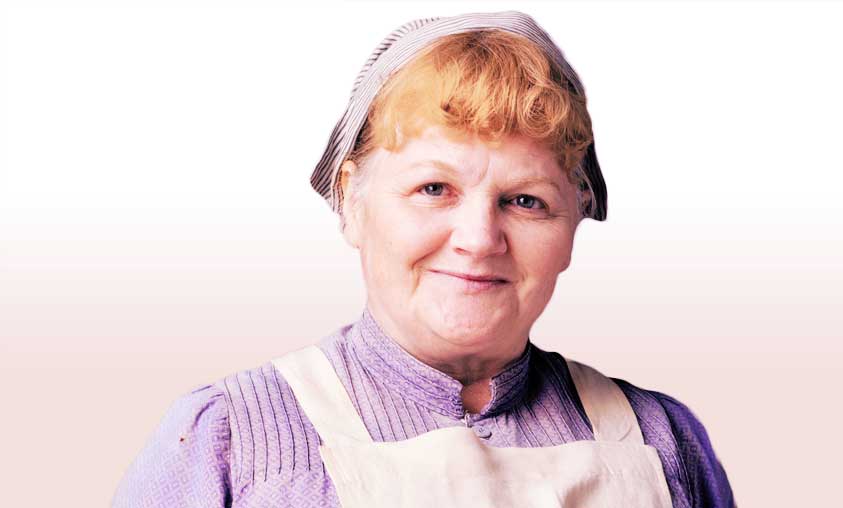 Mrs. Patmore makes no secret about how she feels, at all times. She’s extremely in tune to the emotions of those around her, especially William – she urges Daisy to marry the boy to keep him happy, routinely ignoring Daisy’s objections on “moral grounds,” because she prioritizes the wishes of a dying boy ahead of Daisy’s feelings (having a broader emotional worldview, and morals that shift based on the situation at hand). She frets, she blusters, she asserts, but she cares much more than she lets on. She often agrees with or warms up to those who share her opinions, and she feels anxious in the recovery of her eye surgery that the Crawleys might “like” the new cook so much, they’ll replace her. It’s an irrational fear, since Mr. Crawley himself paid for her operation in the first place – showing her tendency not to analyze too deeply or reach truly rational conclusions (inferior Ti).

She likes things just so in her kitchen, and is meticulous. She makes most of her recipes from memory and all of them go well, except when her eyesight fails and she reaches for the salt instead of the sugar. She doesn’t like change, nor to adapt. Mrs. Patmore doesn’t really enjoy the shifting of the social classes after the war, nor understand Daisy’s need and desire to “make something of herself.” She is practical, focused on attending to the daily needs of the house, and suspicious of anything too new or untested. She likes new ideas, but doesn’t much go in for “fanciful notions.” She tends to be anxious and fear the worst under stress.

Mrs. Patmore would never admit it, but her entire life is built around her fears and anxieties. She worries about losing her job. She worries about William going off to war. She worries about her failing eyesight, how her sister will feel learning about her son being shot for cowardice, etc. Part of her aggressive attitude in the kitchen is to cover up her insecurities and help her feel safe. She tends to work harder under stress, pretending she has everything in hand—right before she has an emotional meltdown (disintegration to 3). She feels safest when connected to other people.

Death and Growing Up in My Girl

I just wanted to take a moment to give you all the love and attention you deserve! Not only are you dealing with your life during stressful time, but you’re using that giant brain to impart knowledge upon those of us who are less informed. True icon all around ❤️

Just wanted to thank you for making this amazing blog :) it has really helped me grow through the years and become a better person and understand other people’s motives.

I wanted to say thank you for everything you do with this blog. It makes such a difference to see such information expanded upon so thoughtfully. All of this means a lot.

Thank you for making this amazing blog :) it has really helped me grow through the years and become a better person and understand other people’s motives.

I love learning how people tick so I can understand better where they’re coming from and I’ve learned so much from you. Thank you so much, Charity, for taking the time to pay attention to us, to teach us valuable knowledge and to show us how we can communicate better. I hope you have a lovely day 🤗🌺

I wanted to thank you for all that you do for the type communities in your own time and on your own dime. I appreciate you and your work.

I understand you run this simply with the intent of sharing your knowledge on a subject of your interest and it may never really crosses your mind how it may be impactful. Maybe I am the silly one for taking it so seriously, but I guarantee you have no idea of how much learning all of this has changed my life. You made a huge difference for at least one person. You made me stop feeling like a lost alien and that is priceless. Thank you for everything.