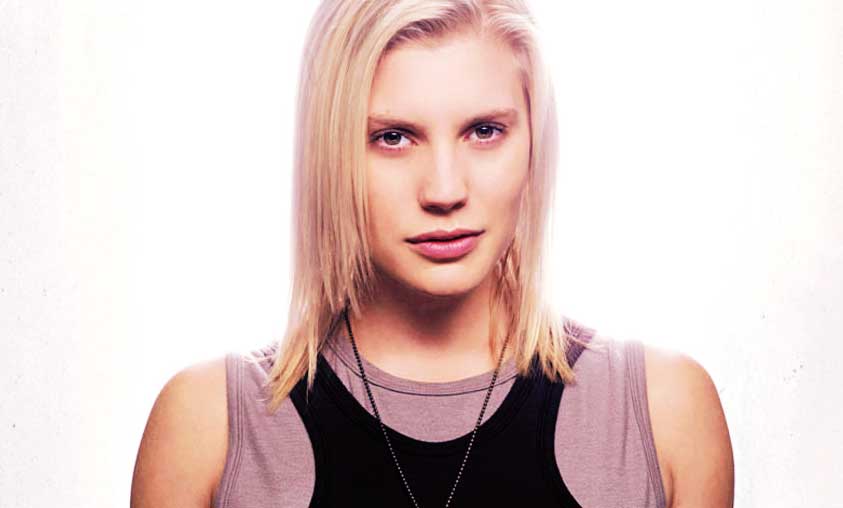 Kara lives in the moment. She has incredible instincts and quick reflexes, which makes her the best flyer and shot in the Fleet. She actively competes to bring down “Scar,” the Cylon fighter who has killed half her copilots. Whenever there is a dangerous mission on the offering, she is the first one to sign up for it. On a whim, she flies back to Caprica to retrieve an arrow, becomes involved with the survivors on land, and then returns to join Roslin’s “coo” against Adama. Her ability to take quick, decisive action saves Lee on more than one occasion, but can also bring out her recklessness. She lives so much for immediate experiences that she doesn’t stop to consider the negative consequences of her actions (sleeping with Gaius, returning to Caprica, defying Tigh, almost getting killed numerous times in dangerous maneuvers). She is quick to respond and take the first punch. She doesn’t learn from past experiences, but instead keeps her options open. Even though she has a short-term focus, Kara can also be persuaded to believe in ideas and consider possibilities that don’t naturally occur to her (such as her return trip to Caprica, based on a fanciful whim Laura convinced her was plausible; she too wants to find “earth”). She sometimes has a bad feeling that “something” is going to happen.

She has a few things she refuses to compromise on, but she will never morally lecture another person – even though she does not want to assassinate Admiral Cain, she agrees to do it for the greater good out of love for Adama – but when he pulls her away from doing it, she confides in him that she thought that the “right decision.” Her emotions are sometimes motivated through her feelings – and she does not share them easily with other people. It’s painful for her to raise up her cup and shout out all the names of the fallen, after they defeat Scar. Kara does not like to appear emotionally vulnerable. She uses Te to help her plan out missions in detail. She barks orders and is ruthless under stressful situations – such as when she “fails” all the prospective pilots after one test run, deeming them too incompetent to fly. She’s sometimes able to put aside her personal feelings and simply follow orders, but also mouths off to Tye on several occasions, an unwise move based on her feelings.

Kara is 100% all about avoiding pain. She does this by living life to the fullest and avoiding thinking about unpleasant things. She over-drinks. She gambles. She runs away from her feelings. She can be amazing fun, causing laughter wherever she goes and able to keep everyone’s spirits high, or self-destructive and indulgent, such as her drunk binges and reckless sexual attitudes. Her 8 wing is aggressive and no-nonsense, but also bound by her desire to have fun. At one point, she tells Lee not to be so “nice,” but to kick her butt and make her take her pills. She is running away from her anguish over having caused the death of the man she loves, by passing him when he failed basic flight, and she’s terrified to admit this to Adama, for fear of losing his affections. She has a generous heart but also a sense of ambition and competitiveness. She is rebellious, assertive, and competitive, inclined to speak her mind and challenge others, and enjoys having control over them, but ultimately is willing to work for the greater good.