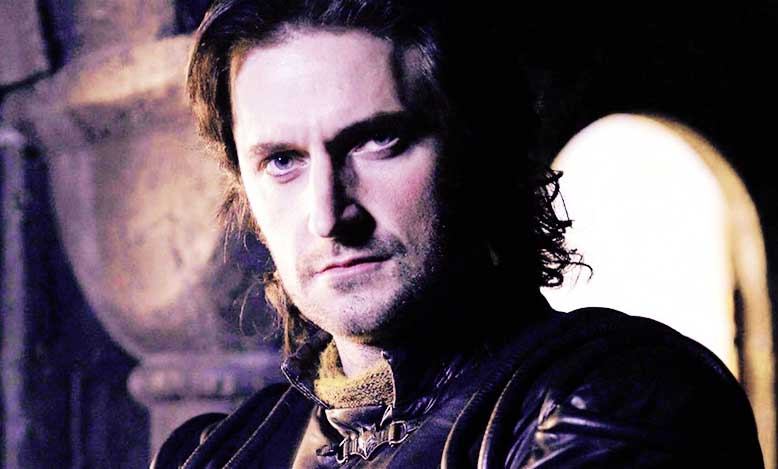 Guy doesn’t reveal much of his thought process externally, but works through things very quickly, often reaching the most logical (and often, though he doesn’t know it, accurate) conclusions when problem solving. He takes a rational approach to the problem of Robin Hood, devising interesting ways to identify and exploit him, but is often frustrated that the Sheriff is one step ahead of him in terms of planning and manipulation. Though he orders people around and to some extent, tries to control them, Guy generally lets the Sheriff set the rules and come up with evil plans. Though just as uncaring and ruthless as the Sheriff in many ways, Guy is also more moral and influenced by the people around him; he feels some guilt over his actions in hurting women and children, and becomes deeply melancholy and driven through remorse after killing someone he cares about. Guy has no fixed point of internal morals to fall back on, so he is easily influenced by Marian’s emotional appeals and also prone to caring what she and the Sheriff think about him. He tends to be a petulant and temperamental if he doesn’t get his way, and often likes to bait Robin Hood by saying things to provoke his anger.

He is an expert swordsman and often impulsive in his decisions; he makes up his mind quickly and leaps on opportunities as they present themselves to him (from thieving and taking the chance to blackmail Marian into marriage, to concealing a knife in his sleeve and trying to gut open an adversary). Guy has an appreciation for beautiful things and is drawn to a wealth and opulent lifestyle; he adopts a mistress for his own enjoyment, and wants to provide a rich and beautiful home for his future wife. He can also be reckless and impulsive, particularly when angry, leading him to kill the person he cares about most in a blind rage. He fixates on a vision of his future with Marian, which he seeks to turn into a reality with many of his decisions. Guy is not often wrong about his conclusions about others, and quickly catches on to the Sheriff’s more diabolical plans. He is manipulated by Marian only because she uses his affection for her to blind him to her true identity, but clearly sees the truth about other people and has a premonition of what is going to happen or that something will go wrong.

Guy presents himself like an 8 much of the time in his aggression, his ruthlessness, his power tactics, and his baiting of Robin Hood… but he also submits to and follows the Sheriff’s orders, without question. Marian on several occasions asks him why he allows the Sheriff to boss him around, and why he does not take control over the situation, but Guy waits for permission before he acts. If his boss tells him to be ruthless, he turns ruthless. He also has too much trust for Marian, followed by skepticism, only to turn around and trust her again—she easily manipulates his feelings, showing the 6 tendency to either trust too much or not enough. He can be reckless, and defiant, antagonizing Robin when tied to a tree and facing his death, but also showing great remorse for certain of his actions. He is genuinely cruel and detached, but also experiences self-doubt at times, and an unfailing loyalty to his superior. He also has a family-centric view, caring for his sister and not understanding why she rejects him, or why she saw his logical decisions in her marriage arrangement as harsh.