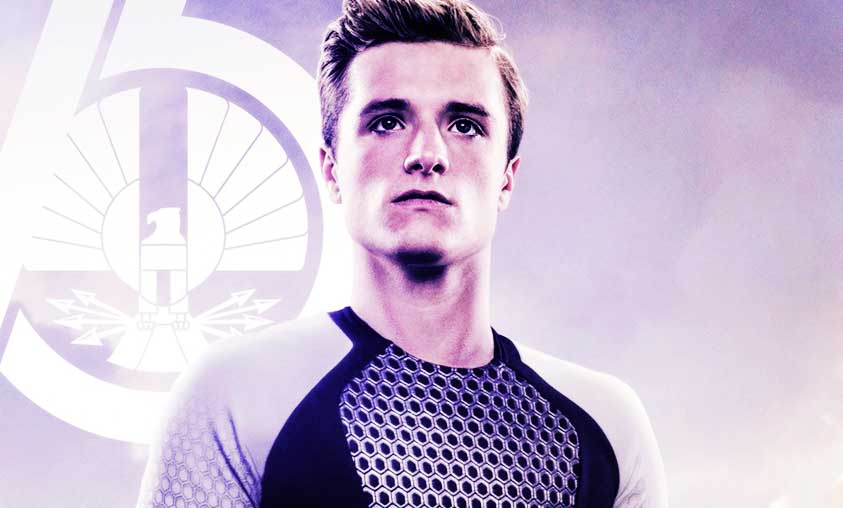 Peeta gains tremendous support and success as a competitor by appealing to the emotions of the crowd and managing to get them on his side. He goes on Caesar’s show and first jokes around to win them over, then drops the bombshell that he’s in love with Katniss (arousing their sympathy), and then later, lies about them expecting a child, all in an attempt to stop the Games. He is so convincing, everyone believes him. Peeta has a warm and outgoing nature, and tries to befriend Katniss on their way to the Games. He is straightforward in his feelings (telling her it isn’t “pretend” with him and he really does love her). He also thinks through his decisions, although the conclusion he reaches is ultimately driven by his emotions – he wants to save Katniss, even at the cost of his own life.

Katniss worries about Peeta surviving the games, because he has learned no survival skills in his previous life that would help him go up against the Tributes. All he knows is how to bake, and how to charm the crowd – he does know how to hide, and camouflage himself, but nothing about hunting or self-defense. Once he knows how the sympathy of the crowd works, Peeta plays to it multiple times, to great effect (using his old techniques over and over again). He plans for the short but not the long term, and recognizes how important Katniss is to the Rebellion. Peeta relies heavily on his own subjective memories, and wishes he could go back and change the past, show more courage in standing up for what he most cared about (Katniss).

Peeta was a compliant, likable young man at home, conflict-adverse but also compassionate. He shared bread with Katniss and expected nothing in return, and he offers her his love, protection, and even willingness to die on her behalf, even if she doesn’t choose him over Gale. Peeta is somewhat asleep to his own survival and deeper needs and desires; he constantly self-sacrifices for other people, often without being asked. He is even willing to die at the end of the first Hunger Games, if it means Katniss lives. As a sexual 9, he merges with her so completely that he has no room for his own survival or physical needs (sp-blindness). He uses social influencing (soc) and his charisma to meet the needs of his sx-bond (he wants Katniss to make it out alive). His 1 wing is focused on doing the ring thing, and has a sense of pride in how he conducts himself. Peeta often does things out of duty, as much as his gut instinct of how to respond to situations. Where Katniss thinks her way through everything (head type), Peeta just knows what the right thing for him to do is–and does it.

Death and Growing Up in My Girl

I just wanted to take a moment to give you all the love and attention you deserve! Not only are you dealing with your life during stressful time, but you’re using that giant brain to impart knowledge upon those of us who are less informed. True icon all around ❤️

Just wanted to thank you for making this amazing blog :) it has really helped me grow through the years and become a better person and understand other people’s motives.

I wanted to say thank you for everything you do with this blog. It makes such a difference to see such information expanded upon so thoughtfully. All of this means a lot.

Thank you for making this amazing blog :) it has really helped me grow through the years and become a better person and understand other people’s motives.

I love learning how people tick so I can understand better where they’re coming from and I’ve learned so much from you. Thank you so much, Charity, for taking the time to pay attention to us, to teach us valuable knowledge and to show us how we can communicate better. I hope you have a lovely day 🤗🌺

I wanted to thank you for all that you do for the type communities in your own time and on your own dime. I appreciate you and your work.

I understand you run this simply with the intent of sharing your knowledge on a subject of your interest and it may never really crosses your mind how it may be impactful. Maybe I am the silly one for taking it so seriously, but I guarantee you have no idea of how much learning all of this has changed my life. You made a huge difference for at least one person. You made me stop feeling like a lost alien and that is priceless. Thank you for everything.